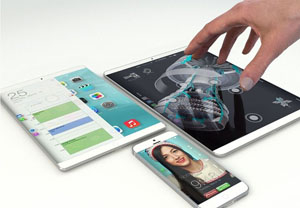 A report from Mobile news has just been released on the 4th said, Apple will increase the RAM to 2 GB on iPad 2 Air. Air iPad 2 and Retina iPad mini can is equipped with a fingerprint sensor on the Home button to support security features TouchID. Both can be the same A8 processor running Apple’s latest.

Besides the iPhone 6 is expected to be unveiled at Apple’s event will take place next September, a number of Apple devices can also be quickly released in October or later including iPhone 6 phablet 5, 5 inch, Air iPad 2 and the next generation of iPad mini with Retina display.
The first SmartWatch runs Apple’s iOS operating system is also an eagerly anticipated device. According to latest information, iWatch will be available 512MB memory capacity and compatible with 8GB NAND Flash. IWatch likely will not require users to synchronize data with your iPhone or iPad. Rumors recently revealed launch iWatch will be delayed until 2015.