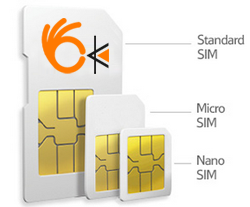 Well I don’t know. Does it look like a biscuit? Does it crumble a little on the edges and leave a trail wherever you go? It does? Well then this is easy, you are holding a cookie. Don’t stuff that in your phone, thank you kindly.

For those of you who actually are able to differentiate a SIM card from a biscuit, good for you. These days there are many different variations of the traditional credit card sized SIM card. In today’s world of ever yet smaller and slimmer mobile phones, the SIM cards were forced to evolve into something smaller and slimmer as well, and they have.

The “Subscriber Identity Module”, the SIM card to its friends, is a piece of technology that identifies you as the caller or the sender, depending on if you are making a call or sending a text. The standard size of a credit card used to be the standard when phones were the size of your PC monitor. These days they are a lot smaller and fit into that nice and small phone of yours.

Now as you can see, there has been a lot of progress in making the SIM cards smaller and more capable over the years, and with the latest invention of the Nano-SIM card, even the thickness has been reduced. Now back to the original question regarding the type of SIM card you currently possess. As you can see, with the modern phones on the market, the Full-size SIM card is pretty much obsolete, and thus we can rule that one out. Now, the question is whether or not you have a phone from after the year 2003 or not, because 2003 is the year when the Micro-SIM card was invented and thus having a mobile phone from the year 2003 or later indicates the choice between the two most commonly used ones: the Micro-SIM and the Nano-SIM. The difference between these two is not that obvious to the human eye, but it is still easy to identify the type of the SIM card. For one thing, you could just simply measure it.

The Nano-SIM card was brought out to the public and went into distribution by the mobile phone operators in 2012, so again, if you own a phone from the year 2012 or later it is highly likely that you have a Nano-SIM card inside your phone.

The Embedded-SIM card has not quite struck out as a success in the mobile phone markets, as then you could not change the carrier you pay for your calls quite as easily as swap in swap out the SIM cards. It does however provide a higher security level, as there is no easy way to remove the SIM card and thus your contacts are safe within the mobile phone.